A Case Of The Why's: The Parenting Shift From Their Generation To Ours

In working with parents, I frequently hear a stream of The Why’s.

Why do I have to explain myself? Why don’t they listen? Why do I feel compelled to NOT scream at my kids and why do I feel guilty when I do? Do you say things to yourself like “MY parents didn’t deal with this,” or “They told us to do something and we just DID it!” 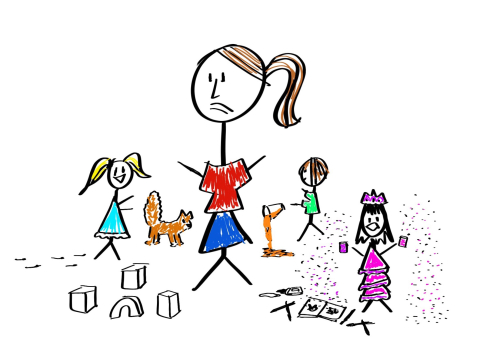 Well, my fellow parents, I am here to tell you that you are not alone, and there are some very intriguing reasons for this parenting frustration.

Aside from the general idea that parenting has changed because of differences in technology, faster, busier daily lives, and a redefinition of the family unit, it is my experience and observation that the root of cooperation in parent/child relationships has made a major shift from when we grew up in the eighties and nineties to now. Back in the day we cooperated with our parents because, quite frankly, we were afraid NOT to. Obviously, we all had different experiences growing up, so I am speaking in general terms here. I, myself, had parents who developed deep and caring relationships with me, but who would also threaten - when my sister and I were up late goofing around (instead of sleeping) - to “Get Grandpa’s belt.”  Now, just the mention of Grandpa’s belt was horrifying to us. Adding legitimacy to the threat was the fact that we had previously been spanked on a few occasions. We quickly moved and did what was asked without argument, or even a second thought. As a side note, I think it’s funny that, as a grown-up, I look back and realize there probably was no “grandpa’s belt.” The idea that Grandpa had supplied each of his fourteen children with one of his belts on the off-chance they would have to “teach children a lesson” is absurd and, quite frankly, comical. But at the time, we feared the harm that would come to us if we did not cooperate.

I think this was relatively common in most families. That generation of parents, as they learned from generations of parents before them, parented with fear as the leading foundation for assisting cooperation from their kids. It was the WHY for the kids. “Listen so you don’t get hurt” was the logic at hand. As human beings, we wish to avoid physical pain. It is one of our greatest fears. When mom said, “Get in the house or else!” you knew in your family what the “else” meant.  Maybe it was a spanking, maybe it was not getting dinner, but whatever it was, you knew that the threat of what was to come would most likely physically harm you in some way.

Now here’s where things get wonky.  Our generation’s ideas about parenting have changed. We don’t want our children to fear us - we want them to respect us. We don’t want our kids to be afraid of us, but because most parents were not raised in this manner, they are perplexed as to how to gain their children’s attention and cooperate. Well guess what, the reason, in my opinion, for why we don’t want our kids to fear us is the same WHY (or motivation) we can use to gain their listening, cooperation and respect. It’s called RELATIONSHIP.

We don’t want our kids to fear us because we have a stronger desire then the generations before to have deep relationships with our children - relationships where we know they feel loved and supported and that we value how they feel.  It can be argued that this may be the backlash of too many spankings as we were growing up, or having parents that “did not do feelings.”  But either way, what I see professionally and in my personal life is many of us wanting to have more positive relationships with our kids, where communication and feelings play a leading role.

So, without physical fear, what reasons do they have to cooperate with us? The answer is one of the other greatest human fears – LONELINESS, and its ugly twin sister REJECTION.  Let me put it this way - We were made to be pack animals and, as I explain to clients all the time, we weren’t meant to do life alone. Even though we have much more sophisticated brains then our caveman ancestors, we still have a primary, inherent fear of being alone, since we instinctively would survive better in a pack. This is why we end up stretching our boundaries for others at times and stay in relationships longer than we know we should. We wish to avoid being alone.

Now let’s transfer this over to the parent/child relationship. What I have been witness to is that the stronger and more valuable the relationship is, the more willing children are to cooperate and the more they want to avoid negative responses from their parents, like disappointment or anything that would cause the relationship harm. So when they think about breaking the rules and sneaking into the kitchen to eat cake after everyone went to bed, they do not fear a spanking for eating cake. They fear that, if caught, they would disappoint mom or dad. They may also fear other negative consequences (like taking TV away for a week), but ultimately, if the parent/child relationship is strong, this will be a part of their thought process.  For example, let’s think about timeouts. If you look at the action of a timeout, you see a person of authority removing the child from the group. This shows a child the behavior is unacceptable and they will be removed from “The Pack.” This bothers children. Not just because they wanted to do what they were doing instead of listen to you, but because they don’t want to be rejected.  When I put my daughter in timeout, the first thing she does when it’s over is to seek big hugs and squeezes from me so she can verify that she’s not, in fact, rejected. That she is still loved and that I still accept her even if I did not accept her behavior.

When kids feel we respect them and they count, their willingness changes from listening and cooperating out of fear, to listening and cooperating because they want to. They want us to be proud of them. They want to feel like they are tied positively into their “pack,” or family. This becomes their WHY. They will lean toward making better decisions because they realize being a part of the pack means their decisions are watched and matter to everyone. There is a sense of community that helps encourage them to make choices for the greater good.

But does having a strong relationship mean your kids will always listen?  Dun Dun DAAAAAH. NO! They won’t! They’re still selfish little beings. They want what they want, when they want it. This is where, just like in any other relationship, you set boundaries. We set boundaries with our kids to teach them what is acceptable and what is not. To allow them to understand we still have authority. Whether we love the little ankle biters or not, we are still in charge. And, ultimately, show them the most primal form of love---Keeping them SAFE.  When they know we will stop them when they are going too far, and we will say ‘no’ to them when it is necessary, they feel (albeit unconsciously) that we are looking out for them and that they can TRUST us. I’m not saying the backlash of words flying out of their mouths or the bad attitude will reflect that. I’m saying they will have a back-of-the-head belief that they can trust you and that you will be there to protect them. They will value this and crave this over time. And yes, anyone who has a teenager knows they will also test this.

So what we do when they test those boundaries is to set warnings and reasonable and (if possible) natural consequences. We remain CONSISTENT so they can TRUST us and know what to expect as they choose from right or wrong in their decision-making. This will help them learn and know their boundaries so they hopefully avoid making the same mistakes over and over again. When your child doesn’t put their toys away, we put the toys in time out. Or when your teenager comes in after curfew, she doesn’t get to go out the next time, or has to be home that many minutes or hours earlier.  Kids need to know there will be a response from you, as the captain of the ship, controller of their universe, and leader of the pack, to their decisions - either positive or negative. But they don’t have to fear you as a person to cooperate with you.

The moral of the story is that yes, things have changed. But I do believe we live in a day and age where it is easier than ever for us to have our cake and eat it to. We can have truly meaningful, deep, respected and respectful relationships with our kids and get cooperation at the same time. I don’t know about you, but that seems like a win to me.

Besides, I’m not sure my dad is willing to give up any of his belts!

So my main takeaways are this: